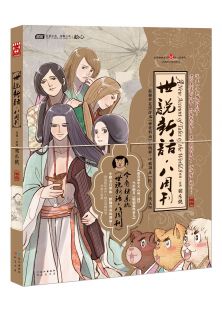 Creating the core of A New Account of the Tales of the World with delicacy and interest, Zhu is the very best!—Tony Wong Yuk-Long, the founder of a Comic Publishing Group and a famous cartoonist

Each page of this book makes me laugh!—Reader Elika

So cute, history should be described in such a vivid and interest way. —Reader Mademoiselle B

It’s one of my favorite Chinese Comic Styles, the combination of antiquity and originality. Learning quite a few trivia in laugter ~hiahia~—Chinese Reader Hai Songqi

★8.8 of 10, a highly praised book, scored by over 1,000 people on Douban(China’s goodreads)! After the first volume was released, it has been rapidly sold over 100,000 copies! Readers love the second volume as well!
★The Chinese popular “ Zhu Letao’s humor in antiquity style”, takes you the time of reading a muckraking weekly—half an hour to know about the history of China’s Wei and Jin dynasties with laughter!
★Unlocking the ancient Chinese life of 2,000 years ago, refreshes your knowledge and imagination, that the ancient Chinese are so fashionable and so interesting!
•Promotion and affluence decided by good looks, outdoor activities must be with good looking, especially for men!
•The good looking men’s appearance always causes traffic jams, even be welcomed by crazy fans to death?
•The beauty like handsome man, but handsome men prefer to hang out with other handsome men?
•The luxurious toilet services for the wealthy, see how the ancient wealthy use the toilet!
•From the ranking list of the dominated wife, see whose husband is most amenable!
……
★The book comes with a small complimentary gift: exquisite scroll painting or an ornate large poster.

Wei and Jin Dynasties were the most politically chaotic and miserable era in Chinese history, however, they were also the era of extremely mental freedom and liberty in the history of spirit. In this era, you will see an alternative history of survival and philosophy of life in the ancient.
Here, the well-known cartoonist Zhu Letao tries to use relaxed and interesting cartoons, starting from A New Account of the Tales of the World, having an attractive talk on history, to show readers the era of extremely mental freedom and liberty. Each book follows the example of muckraking weekly that each issue has only one topic and each topic includes several relevant entertaining knowledge.
This book is designed to help readers to easily learn those vivid historical anecdotes of China’s Weijin Dynasties, with the attitude of reading gossip and the mood of joy, and get to know the legendary characters who are dashing, or upright, or tyrannical, or hilarious……with strong personality and glory deeds.

Zhu Letao
Formerly known as Qi Xiao, she is a well-known professional cartoonist in China. Her works are full of whimsical ideas and liberal style. She has won many awards, such as China Animation & Comic Competition Golden Dragon Award for five times, Chinese Cartoon Award for one time, “Beautiful Monkey Kind” Award and many other domestic professional awards. She was voted by readers as one of the “Four Kings of Chinese Cartoons” and was selected by Asahi Shimbun as one of the eight cultural figures among the “100 people who influenced China, the standard-bearer of the times”. She once had a visit to Japan as the representative of Chinese cartoonists and attended the
Festival international de la bande dessinée d'Angoulême in France ( the largest and oldest cartoon exhibition in Europea).
Her works were selected in the 11th National Art Exhibition. Her representative works include "Marta" series, "Childhood Time Machine" series, " A New Account of the Tales of the World•Eight Weekly" series, "Baby, Let's Travel Around the World Together" series, "Love" series, etc.

Foreword
Prologue What is the Demeanor of Weijin
Chapter 1 The Best Looking Man to Peddle His Unstoppable Charm
Chapter 2 The Most Luxurious Toilet Make Everyone’s Jaw Drop
Chapter 3 The Fierce Wife, Pull Off the Mistress
Chapter 4 The Cutest Boy Wei Jie, Cute Photo Exposure
Chapter 5 The Aberrant Way of Flaunting Wealth, the Fashion of Breast-Feeding the Piggy?
Chapter 6 What makes a beggar can PK the Richest Man
Chapter 7 “Otaku’s Goddess’ Girl Lv Zhu
Chapter 8 The Trend of Vaulting Over Walls For Assignation in Secret—Love is the Truth!
Chapter 9 The Ancient Woman with Gay Affection Peep “Seven Beautiful Men of the Bamboo Grove” late at night
Chapter 10 Ji Kang: Freedom! Don’t command me to Stop
Epilogue The Beauty of China