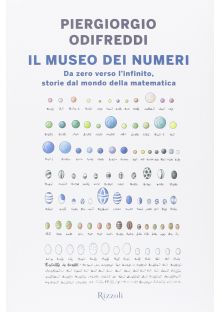 THE MUSEUM OF NUMBERS. From zero to infinity, stories from the world of mathematics

“Remove numbers from things, and those things will be lost.”
– St. Augustine of Hippo

★Right sold in simplified Chinese!
★This book has had 7 editions with more than 40,000 copies sold, which is a great result in Italy. The more so if we consider that it covers a very specific subject, even though it handles maths in an original passionate way.
★Piergiorgio Odifreddi is a best-selling author of more than 150,000 copies sold, he won the important Italian popular science award Galieo Prize!
★English catalogue available.

“What is a number, that a man may know it, and a man, that he may know a number?”
Neurophysiologist Warren McCulloch asked himself these questions in 1960, evidently dissatisfied with many of the rigid and empty definitions offered by philosophers up to that time.
In this book Piergiorgio Odifreddi tackles the two questions with a more fluid and practical approach: instead of trying futilely to tell us what numbers are with abstract concepts, he usefully shows us a series of numbers concretely. He has chosen about fifty among those that are most appropriate to be discussed, and he shows them to us as would a guide in a museum, explaining and illustrating the overall structure and particular details of each one.
Walking through this gallery of paintings, readers will find the small and great numbers from 0 to 9, and realize that they do not know them as well as they had assumed. They will discover the charm of numbers previously believed to be without interest, such as 42 or 1,729. They will try to imagine numbers so large as to be almost elusive and inconceivable. And they will finally grasp why mathematicians believe that numbers are the closest thing to divinity that man can perceive: because that’s what they are.

Piergiorgio Odifreddi (1950) studied mathematics in Italy, the United States and the Soviet Union, and has taught logic at the University of Turin and at Cornell University. He writes for La Repubblica and Le Scienze and in 2011 he won the Galileo Prize for science popularization. His previous books has been sold in Simplified Chinese, Spanish, Catalan and Turkish.

The dawns of the number
Finger-counting 17
A bounty-notch on numbers (The man of Cro-Magnon) 21
The unknotting of the knot (The early Chinese and the Incas) 24
Calculations begin (The Elamites and the Sumerians) 26
The missionary position (The Babylonians) 31
Horus’ eye (The Egyptians) 35
Coded alphabets (The Greeks and the Jews) 39
The abacus jugglers (The Chinese) 44
Zero, finally (The Indians and the Maya) 48
The “Arabic” figures (The Indians and the Arabs) 53