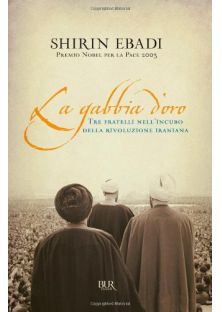 “Riveting ... this moving book is a monument in itself, commemorating friendship and the human spirit — The Times, UK

“Amazing. Do not miss this book” — President Jessica Tuchman Mathews of the Carnegie Endowment for International Peace

“Gripping story... a sad lesson in how revolutions eat their own” — Director Isobel Coleman of the Council on Foreign Relations

“Couldn’t put it down...guarantee you will be touched” — Executive Director Karen Greenberg of The Center on Law and Security at New York University

★Rights sold in France, Georgia, Portugal, Spain (Spanish and Catalan), Turkey, USA (World English)!
★The true story of a family and of the Iranian tragedy, told with stunning narrative power by the Nobel prizewinner Shirin Ebadi.
★A denouncement with no holds barred of the Iranian people’s sufferings under the theocratic regime but also a tough j’accuse against the USA.
★For those who liked the books of Khaled Hosseini or Marjane Satrapi’s Persepolis – for those who seek great personal sagas capable of providing a key to understanding recent history.
★English translation available.

Three brothers in 1970s Iran. Three conflicting political credos. Abbas is a general of the Shah, forced to flee to the USA when the regime starts to fall apart, abandoned even by the Americans. Javad works his way up in the communist party, clandestine under the Shah, and very soon outlawed under Khomeini.
Arrested and put to death, he will be buried in a nameless grave in the desert, which is the fate of atheists. Alì instead is a devout guardian of the Islamic revolution – but disenchantment makes him take refuge in France, in a place secret for everyone but not for the killer (a childhood friend) sent by the ayatollahs’ secret services. The story of the three brothers, full of pathos and terror, is told by their sister Pari, the only survivor, who confides in her friend Shirin Ebadi. But underlying the personal pain there is the tragedy of an entire people, tormented by the Shah’s corruption and violence and by unscrupulous American policy, and still under the sway of the present theocratic regime.

SHIRIN EBADI
Iranian, was awarded the Nobel Peace Prize in 2003. Under fire from the Ahmadinejad regime because of her battles for democracy and women’s rights, she continues her intensive propaganda effort and legal fights, travelling throughout the world in the process. Her previous book Iran Awakening: A memoir of Revolution and hope has been translated in 40 countries.