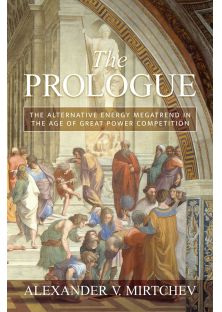 The Prologue: The Alternative Energy Megatrend in the Age of Great Power Competition

“With the advancements in alternative energy technology at the beginning of the 21st century, energy security thinking and planning will never be the same—Alexander Mirtchev’s profoundly original book reveals these new dilemmas that will challenge policymakers in all major economies and provides for dealing with the new realities in a smart way.”—The Hon. Judge William H. Webster, Chairman, Homeland Security Advisory Council, Former Director of the CIA and FBI

"Alexander Mirtchev's work is an impressive and comprehensive study of the geo-political, security, economic, and environmental impacts of the alternative energy trend. The accelerating development of alternative energy, as this book shows, is a geo-political game-changing phenomenon. The new Great Energy Game will have a greater influence on global affairs in the 21st century than Star Wars did in the 20th." -- Lord Truscott of St. James's, Former UK Energy Secretary

"The development of alternative energies is now sufficiently advanced, at least in terms of promise, to influence the 'global security equation,' making the book The Prologue a timely one indeed." -- Prof. Shirley M. Tilghman, President, Princeton University

"Alexander Mirtchev's book is an amazing study that has succeeded in breaking through the complexities of the current alternative energy development and strategies, highlighting the major policy challenges—energy independence, environmental and economic security, and defense, nuclear proliferation and geopolitical considerations, and putting forward pragmatic and smart methodology for addressing the planned, as well as the unintended and the unforeseen." -- The Hon. William Sessions, Partner, Holland & Knight, Former Director of the FBI

"The 'alternative energy megatrend.' as described in Alexander Mirtchev's book, occupies a large and growing role in the World Bank's energy portfolio and policy advice. With the Bank's focus on economic growth and sustainable development, his emphasis on the security dimensions of this issue is both interesting and relevant." -- Rachel Kyte, Vice President, Sustainable Development, The World Bank

"Alexander Mirtchev's new book is an insightful strategic analysis of the security implications of modern global phenomena that provides for enhanced understanding of the rapidly transforming 21st century geopolitical environment as well as how to deal with its manifest challenges. Policymakers, as well as academia and the private sector, would benefit from taking on board its original thesis and bold ideas." -- Commander Harlan K. Ullman (ret.) PhD, Distinguished Senior Fellow, National Defense University, Chairman, Killowen Group, Author, "Shock and Awe: Achieving Rapid Dominance"

"I found your book most stimulating. I look forward to seeing the reception." -- The Rt. Hon. Lord Robertson of Port Ellen, KT, GCMG, HonFRSE, PC, Former Secretary General of NATO

"Alexander Mirtchev has provided a thorough examination of a possible significant future, in which the implications of alternative energy source developments come to dominate national, economic, and environmental security and world geopolitics. The thesis in the book is one that needs to be understood by global policymakers, not least in China." -- Prof. Sir David Omand, Former UK Security and Intelligence Coordinator and author of "Securing the State"

★Great Power Competition is under the great influence of alternative energy supply, with a profound impact on political power, economies, environmental security and world geopolitics. This book provides insightful strategic analysis and bold ideas on the situation of modern international security, global economy and the sustainable development of ecological environment.

★A brilliant book on the Global Security Equation! Facilitating readers to the better understanding of the rapidly changing geopolitical environment and to the appropriate response to the challenges under the new realities, global policy makers, academics and society will be benefited.

A comprehensive study of the geopolitical, security, economic, and environmental future of a major game-changing phenomenon—the alternative energy megatrend.

Why and how have contemporary alternative energy developments evolved into a 21st century global socio-political and techno-economic megatrend? What are the security implications of this megatrend? And what does the megatrend’s evolution reveal about upcoming geopolitical, energy, defense, environmental, and economic security challenges? This book endeavors to answer these questions by establishing the conceptual framework of a universally securitized world in which mutually interacting threats have expanded the needs and security considerations of today’s globalized and interdependent actors, including states, international organizations, multinational corporations, and political and social movements.

Prof. Dr. Alexander V. Mirtchev is a U.S. academic, business executive, and author. He is a Distinguished Visiting Professor at the SCHAR School of Policy and Government at George Mason University. Mirtchev serves as a vice chair of the Atlantic Council of the United States, where he is also a member of the Board of Directors and the Executive Committee He is a member of the James Madison Council at the Library of Congress. Mirtchev was a Senior fellow and member of the Wilson National Cabinet at the Woodrow Wilson International Center for Scholars where he is a founding member of the Council to the Kissinger Institute on China and the U.S. He also served as a Vice-President of the Royal United Services Institute for Defense and Security (RUSI), the UK global security think tank, and was the Executive Chairman of RUSI International.