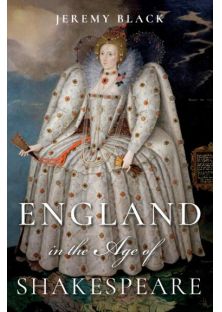 England in the Age of Shakespeare

'A different approach to Shakespeare by a worthy historian. Jeremy Black explored numerous aspects of living in the Elizabethan age of Shakespeare and his writing. The book paints a picture of belief, love, fears and Shakespeare's portrayal of real, everyday life. Black probes these influences and their resulting effect on the playwright's creativity. An enjoyable, fascinating read.'
_Goodreads review

★A fascinating work by Jeremy Black MBE, the prolific historian and writer, "the most prolific historical scholar of our age"!
★An enjoyable account of English History seen through the lens of Shakespeare’s plays, reveling in scenes from Elizabethan England.
★Sold for Chinese Simplified Rights.

How did it feel to hear Macbeth's witches chant of "double, double toil and trouble" at a time when magic and witchcraft were as real as anything science had to offer? How were justice and forgiveness understood by the audience who first watched King Lear; how were love and romance viewed by those who first saw Romeo and Juliet?
In England in the Age of Shakespeare, Jeremy Black takes readers on a tour of life in the streets, homes, farms, churches, and palaces of the Bard's era. Panning from play to audience and back again, Black shows how Shakespeare's plays would have been experienced and interpreted by those who paid to see them. From the dangers of travel to the indignities of everyday life in teeming London, Black explores the jokes, political and economic references, and small asides that Shakespeare's audiences would have recognized. These moments of recognition often reflected the audience's own experiences of what it was to, as Hamlet says, "grunt and sweat under a weary life." Black's clear and sweeping approach seeks to reclaim Shakespeare from the ivory tower and make the plays' histories more accessible to the public for whom the plays were always intended.

A British historian, prolific lecturer and writer, and a retired professor of history at the University of Exeter.
He is a senior fellow at the Center for the Study of America and the West at the Foreign Policy Research Institute in Philadelphia. Black graduated from Queens' College, Cambridge, with a starred first and then did postgraduate work at St John's and Merton Colleges, Oxford.
He has been described as "the most prolific historical scholar of our age". He is the author of over 140 books, principally but not exclusively on 18th-century British politics and international relations, including Charting the Past: The Historical Worlds of Eighteenth-Century England; London: A History; and Mapping Shakespeare: An Exploration of Shakespeare's Worlds through Maps .
2000 MBE for services to postage stamp design as an adviser to the Royal Mail from 1997.
2008 Samuel Eliot Morison Prize for lifetime achievement given by the Society for Military History.